She had a gun. The one smoking in her hand was not it. No, this one was untraceable; she’d made sure of that. Her heart pounded in her ears drowning the sound of his gurgling as the blood pooled around his fallen body. Amanda closed her eyes and exhaled, releasing all the hate, all the sorrow.

It took a while to get him. Timing had to be right. There could be no witnesses. He had stopped at the stop sign in no hurry to proceed despite the lack of traffic, disregarding the driver waiting behind him. She pressed the gas pedal and tapped his rear end. She saw his angry eyes glaring at her through his rearview mirror before he jumped out his car and slammed the door. As he stomped toward her, she exited her clunker vehicle—the one she had just purchased for $300 for this very purpose—the one that will be sold for scrap tomorrow– and emptied the gun in his chest before he could utter a single word. 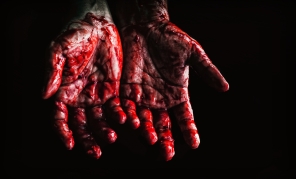 Before tonight she was sure he slept well. When he washed his hands, he didn’t see red. He only washed away the germs from his hands, the stickiness off his fingers. The dirt from his nails when he played baseball with his son.

But he couldn’t wash away Jalen’s blood.

She was sure he didn’t think about her son when he played with his. He didn’t care about the angry, aggrieved mother dreaming of justice; she will never again have a moment of play with her son.

It was an unfortunate accident, they said. He insisted he wasn’t speeding. The boy came from out of nowhere. No, he hadn’t run the stop sign and plowed over her son.

But you could see the tire marks embedded in his crushed skull, chest, and left arm. And the blood, so much blood.

You just have to accept that, Amanda, they kept saying. Bad things do happen.

The impact had destroyed the front end of his vehicle. He got it restored. But her son was not.

Turns out this guy was not as innocent as he claimed. He was a speed demon with little regard for the children in the neighborhood. With little regard for anyone. Amanda knew because ever since he killed her son, she’d been following him. In just a month’s time, he’d almost hit two other kids, one on his bike, the other walking across the street. He even had the nerve to shout obscenities from his car at them.

When he offered his trifling apology for running over her son, he kept checking his watch like he had something more important to do. Well, she’d fixed that. Now he had nothing left to do. He didn’t have to be in a hurry anymore. He didn’t have to worry about anymore kids getting in his way.

Warm tears trickled down her face and dripped off her chin. As she watched him gasp his last breath, she wished he could live again so she could kill him again. Just once more.

An image of him playing with his son made her choke on fresh grief in her throat. She thought about his son looking up to his father loving him like a hero. But he was not. He was a selfish bastard who stole lives from others while enjoying the pleasures of his own. She wondered for a second if the boy were anything like his father, like maybe she should do the world a favor and rid it of his seed. The thought was as quick as a sneeze, the only trace of it was a shiver up her spine.

She drew closer to him, careful not to step into his blood. She didn’t want any trace of him to take home with her. After tonight she will never think of him again. This night will descend into the bottomless well of yesterday and remain there.

His empty dead eyes stared at the darkening sky and she regarded them. Contemplating her head tilted to one side, then the other. People had warned her that his death would not bring her son back nor would it make her feel better. They were right. But it didn’t make her feel worse either. Now she just felt nothing. She could live with that.

It began to rain, drops at first, then a downpour. She watched idly as the water chased his blood down the street. Cold rain pattered, soaking her hair, dripping off her nose, plastering her clothes to her. It made her shiver. She knew that if she stayed out in it too long, her bones would suffer later. But those were pains she could handle.

The streetlights clicked on. The one overhead looked down at her with a weak eye, not fully awake. She glanced at it, then back at the dead man. Soon, someone will come along and see him lying there. They will gasp at the sight of him and perhaps pity him. They will make a frantic call to the police and they will come for him.

And just like her son, his killer will get away too.

Saying a lot with few words.

This site uses Akismet to reduce spam. Learn how your comment data is processed.